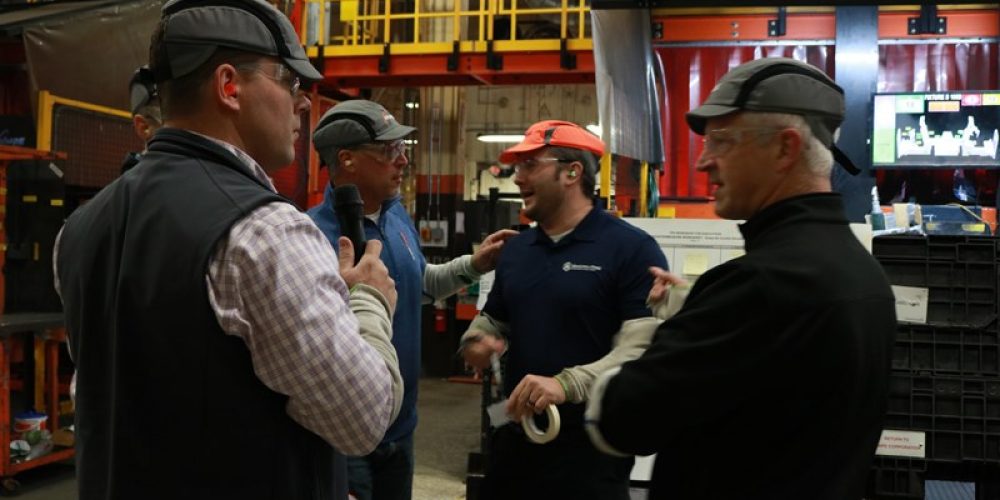 It is not often that Toyota finds a supplier who actively pursues their mentoring. Shape was one of the unique companies who reached out for Toyota’s support nearly 18 months ago. After a few phone conferences and a formal meeting at Shape, Toyota took the plunge to help us continue our lean journey. Through intense training, checkpoints, and support, we have grown. In the spring of 2016 the Shape team presented final reports to numerous executive level leaders from Shape and Toyota. As Toyota left, Shape continued the learning process.

Six months later another checkpoint meeting with Toyota brought Melvin Sullivan, general manager, and Terry Horinouchi, vice president, who wanted to see what Shape had done for themselves and understand our continued leadership commitment. In preparation, Peter Tornga, manufacturing engineer, Andy Tanner, manufacturing engineer, and Jeff Salisbury, manufacturing engineer, worked copious hours reviewing their own internal presentations and preparing them for Toyota. Melvin and Terry spent time on the floor with each engineer and a group of Shape leadership asking intuitive questions about our process and journey using the tools Toyota shared with us.

After time on the shop floor the leadership teams reconvened to discuss next steps. Daric Morell, director of manufacturing, shared with Toyota elements of our strategic plan, tactical deployment strategies of the tools that Toyota taught us in late 2015, and our commitment to support Toyota moving forward. Part of this commitment is to provide a place where Toyota and BAMA can send team members for their own development. Terry proclaimed, “I am shocked,” Shape team members hung in suspense, “pleasantly shocked at what you have done in the last 6 months to take the tools we provided and continue to share them with your team.” He further went on to thank Shape for their willingness to provide time and resources for development indicating that Shape, “would be a shining light for team member development.”

Melvin and Terry bid farewell with numerous open actions for team members from both Shape and Toyota to begin rallying around the energy developed during the meeting and discuss next steps for 2017 and beyond.